July 2011 saw Housework Heroes celebrate its 10th Birthday.  Starting in Perth WA, Housework Heroes now has over 50 franchisees, many of whom have gone on to build significant business’s and has extended its coverage to all states.  The business was ranked in BRW Magazines Top 50 Fastest Growing Franchises in three consecutive years – 2005, 2006 and 2007.

Along the way we have seen our Franchisees win national awards – Raelene Rowland – WA Women in Franchising Award 2004 and Bob & Kim Larkman – State Finalists in the FCA Franchisee of the Year 2006.

This a dual celebration, as our first franchisee – Ray Godden, Housework Heroes (WA) – Warwick, also celebrates 10 years as a Housework Hero.  Before starting with Housework Heroes Ray operated his own courier business but fancied a change.  He has been and continues to be, a great ambassador for Housework Heroes and is also a fantastic example of what can be achieved by combining a good franchise business with an individual willing to provide their customers with excellent service. 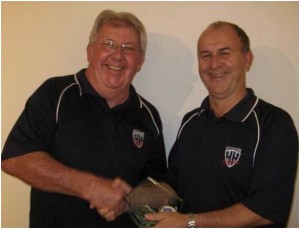